Will Your New Year’s Eve on the Town Hurt Your Baby? 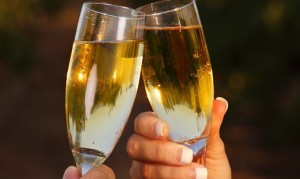 Keeping in mind that I drink a glass of wine MAYBE once every month (the Cranberry Wine from Sorrenti is a seasonal favorite in our house), and I’ve got some “sparkling cider” chilling in the garage to ring in the New Year with…so its not like I’m some kind of a lush…

It’s New Year’s Eve Day and if previous years are any indication, the internet will be awash in what else…articles that intend to instill fear in breastfeeding mothers who just wanted to enjoy a toast to the New Year…

“Mother Kills Son While Breastfeeding Him Drunk” reads the headline…which is of course eye catching. But the story its self is full of holes.

The story contends that the mother drank a liter of Port, which resulted in her blood alcohol content being 2.5%. Most people are unconscious at a blood alcohol somewhere between 0.3-0.39% and death comes around 0.5%. How was this woman somehow still able to breastfeed her baby with a blood alcohol level of 2.5%? Would one liter of Port really have given a woman a blood alcohol level that high? By my calculations using a chart on Wikipedia, a woman weighing 120 lbs would actually need to consume more like 5 liters of port to get a 2.5% alcohol level. That’s some serious drinking…

Assuming there was a typo in the article and the woman had a lower blood alcohol level…lets say even 1%…her baby would need to take in about 12 oz of milk to end up with a blood alcohol level of 0.4 (extrapolating from the Wikipedia chart for an 8 lb baby). How many two week old babies take in that much milk in 1 feed?

I suggest that something else was done to that baby to result in a 0.4% blood alcohol level…like giving the Port directly to the baby.But the resulting discussions have led to many recommendations to “pump and dump.”

For the average woman who has a couple of drinks, there really is no need to pump & dump in my opinion. The amount of alcohol her baby would get in her milk is miniscule. I’m not alone. Dr. Jack Newman, renowned for his expertise in breastfeeding, has said:

Reasonable alcohol intake should not be discouraged at all. As is the case with most drugs, very little alcohol comes out in the milk. The mother can take some alcohol and continue breastfeeding as she normally does. Prohibiting alcohol is another way we make life unnecessarily restrictive for nursing mothers.

La Leche League recommends against pumping and dumping because it doesn’t work. You will simply make new milk that has alcohol in it. Once the alcohol is cleared from your blood stream, it also clears from any milk that was already in your breasts.

The strips test positive for alcohol at 0.02% alcohol, while admitting that it takes at least a level of 0.03% alcohol level to have any impact on the baby. To put this amount in some perspective…wine has about 12% alcohol, so its like putting about 1/100th of an ounce of wine in a 5 oz bottle of milk. Of course they don’t tell you that the impact on the baby is only short term…the baby will nurse more frequently for a few hours, and take in less milk, but then will make up the missed milk intake during hours 8-16 after the mother has stopped drinking alcoholic drinks.

So my thoughts? Enjoy a glass of champagne or two tonight. And once you get back to your baby, don’t feel guilty about breastfeeding.

What do you think is a safe policy on alcohol consumption for a woman who is breastfeeding?