Are You a “FitMama?”

Are you a FitMama? Today’s blog is a past review by Jenn of Leisa Hart’s fitmama prenatal workout.

The package description lets you know that this workout includes 20 minutes of Salsa Dance, 20 minutes of Yoga Fat Burn, 6 minutes of Labor & Delivery Prep, and 8 minutes of Prenatal Stretch and Relax. Bonus features that I discovered once I put the DVD in my player included an “Easing Labor” segment that displayed a lunge, forward lean, and squat that could be helpful in labor and a “Bonus Stretch” segment that focused on lower body stretches. I found the menu to be well laid out, including an option to choose exercise tracks rather than having to use the fast-forward feature as would be needed with the prenatal yoga DVD from yesterday. I have a 2003 version of the DVD, but it was re-released in 2008.

This DVD also includes an introductory segment explaining what will be required in the work out, and safety precautions. Leisa reviews ACOG guidelines on exercise and stresses that it is important to be hydrated before, during, and after exercise.

The exercise starts off with the Salsa Dance segment, which is upbeat and fun, though the hand movements would take me a couple times to get completely correct. Leisa is somewhere around 8 months pregnant with her second child at the time of filming (and “all belly”), and she is joined by two women in their first trimester on her right, and two in their second trimester on her left. Leisa is very cheerful and encourages pregnant women to be confident in their bodies. She reminds participants regularly to modify exercises as needed to be able to talk while exercising, and she also reminds participants to drink often. Her “cue-ing” is very good even with her avoiding the use of “left and right,” which allows the participant to decide if she wants to be a mirror image of the instructor (my preference), or if she wants to match right to right, left to left.

The yoga section is more intense than on the previous all yoga work out, though it was simple enough for a beginner and did not involve any complicated postures. During this segment she instructs participants on deep abdominal breathing rather than shallow chest breathing, which earned her more points in my book. In this segment she did offer a few modifications to the poses to accommodate the growing abdomen and balance challenges, but she also noted that modifications should be based on physical ability and even a woman’s daily comfort rather than arbitrary trimester divisions.


The Labor & Delivery Prep consisted of standing and squatting abdominal exercises, and some pelvic floor exercises. As my notation on yesterday’s review, research has shown that doing pelvic floor exercises during an exercise class does not lead to measurable benefit, however that may be because the limited amount of exercise is not enough. Leisa recommends doing 10 sets of 10 pelvic floor contractions per day. A yoga mat, a pillow (I really would love to have the purple pillows used in the DVD…I love purple!), and an optional yoga ball were used in this segment. 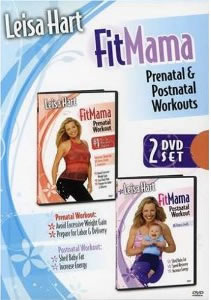 The final segment, Prenatal Stretch & Relax, is accompanied by very soothing music, and was very relaxing. A yoga mat, pillow, yoga strap or towel, and an optional yoga ball were used.

Over all I liked this DVD a lot for a beginning exerciser or for someone who wants a moderate workout. As a bonus, it can also be purchased as a 2 DVD set with a post-natal work out. On an intensity scale of 0 being sitting on your couch and 10 being running a marathon, this workout measures in somewhere around 6.

What did you do to stay fit during pregnancy?